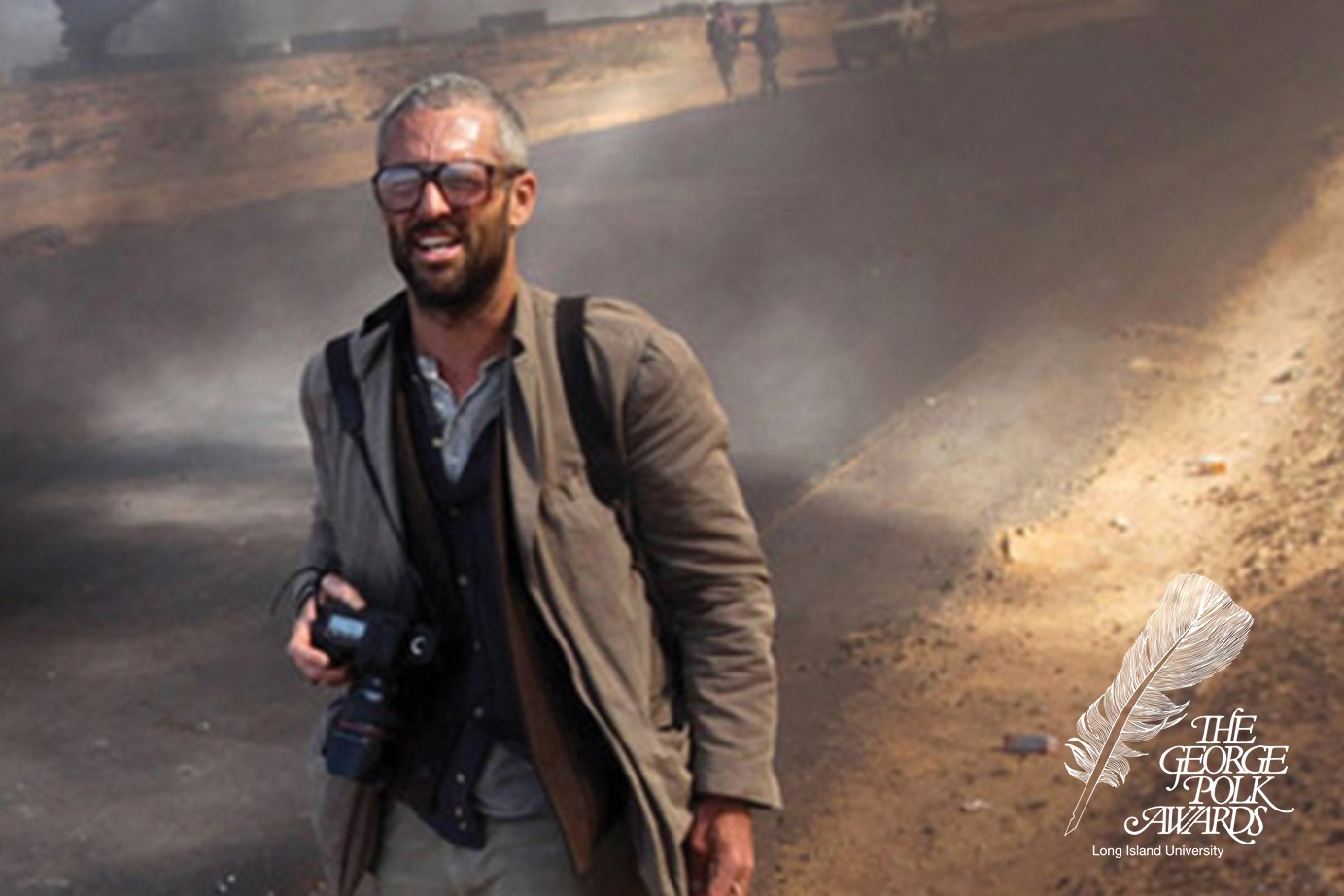 NEW YORK (Feb. 21, 2022) – Long Island University (LIU) has announced the winners of the George Polk Awards in Journalism, honoring journalists in 15 categories for their reporting in 2021.

Award winners span a wide range of revelatory news coverage including the plot behind a Haitian assassination, the impact of a Madagascar climate disaster, the depth of American political upheaval, the consequences of corporate subterfuge, the victimization of brain-damaged children and factory workers in Florida, and the exploitation of migrants here and abroad. They were selected from a record total of 610 submissions of work that appeared in print, online, on television or radio and were nominated by news organizations, individuals or a national panel of advisors.

“Not only did we receive a record number of submissions but they came from far more sources of investigative reporting than ever before, and dozens in addition to the award winners represented first-class work,” said John Darnton, curator of the awards. “This speaks to the vitality and continued promise of a changing journalism landscape and is reason to feel optimistic about the future of our craft.”

The George Polk Awards were established in 1949 by LIU to commemorate George Polk, a CBS correspondent murdered in 1948 while covering the Greek civil war. The awards, which place a premium on investigative and enterprising reporting that gains attention and achieves results, are conferred annually to honor special achievement in journalism.

Long Island University Board of Trustees Chair Eric Krasnoff stated, “The George Polk Awards are one of the University’s proudest traditions, honoring the excellent journalists whose continual search for the truth is foundational to our democratic society.”

The award for Foreign Reporting goes to Maria Abi-Habib, Frances Robles and the staff of The New York Times for defying danger to reveal concealed aspects of the murder of Haitian president Jovenel Moïse. Their detailed accounts attributed the assassination to a plot by drug traffickers likely concerned that the president might expose them; debunked official versions of events; and exposed disturbing aspects of Moïse’s past.

The staff of the Washington Post has won the National Reporting award for “The Attack,” a three-part online series that cited systematic security failures in advance of the January attack on the U. S. Capitol. The series documented President Trump’s incitement of the insurrectionists and refusal to heed pleas to intercede, and examined the continued growth of radical hate groups and the resumption of Republican efforts to promote baseless claims of 2020 election fraud.

The award for State Reporting goes to Carol Marbin Miller and Daniel Chang of the Miami Herald in partnership with ProPublica for exposing the consequence of a 1988 law designed to shelter medical providers from lawsuits by funding lifelong care for children severely disabled by birth-related brain injuries. After their series, “Birth & Betrayal,” reported that an agency stewarding the funds repeatedly refused pleas for care while amassing nearly $1.7 billion, its director and board departed and the law was revised.

Ian Urbina of The New Yorker has been honored for International Reporting for “The Secretive Prisons That Keep Migrants Out of Europe.” The article, reported in collaboration with The Outlaw Ocean Project, revealed that the European Union equipped and trained Libyans to intercept migrants from sub-Saharan Africa at sea and hold them in secret prisons. During their reporting, Urbina and his team were seized by Libyan agents and held for six days at a black site where they were blindfolded, beaten and interrogated before being released.

The Medical Reporting award goes to Adam Feuerstein, Matthew Herper and Damian Garde of STAT for revealing Biogen’s covert lobbying of the Food and Drug Administration, which overruled its scientific advisors to grant approval for Biogen’s new and costly treatment for Alzheimer’s disease despite questionable trial results. Multiple investigations ensued and the Centers for Medicare and Medicaid Services restricted coverage for the drug to further trials.

The Environmental Reporting award is presented to ABC news anchor David Muir, executive producer Almin Karamehmedovic and producer Esther Castillejo for “The Children of Climate Change,” a series that aired on ABC World News Tonight and Nightline on how global warming led to a famine devastating a remote, drought-stricken region of Madagascar. Muir’s dispatches, which focused on the plight of a half-million severely malnourished children, provoked a global outcry and raised concerns at the UN Global Summit on Climate in Scotland.

Sarah Stillman of The New Yorker has won the Magazine Reporting award for shedding light on an often-overlooked group of victims of the fires, floods, hurricanes and tornadoes striking Americans with increasing frequency. “The Migrant Workers Who Follow Climate Disasters” delves into federal contractors benefitting from the multi-billion-dollar disaster recovery industry and the employees they exploit, many of whom are undocumented immigrants or foreign guest workers who live and work in abysmal conditions.

The award for Military Reporting goes to freelancer Azmat Khan, reporters Dave Philipps and Eric Schmitt and the staff of The New York Times for uncovering intelligence failures and civilian deaths associated with Middle East air strikes, including a drone bombing that mistakenly killed an aid worker and nine others, seven of them children, during the U.S. withdrawal from Afghanistan. Using a trove of documents uncovered by Khan, who investigated the story for four years, the Times outlined a record of deadly errors, most unreported or understated.

Linda So, Jason Szep and the staff of Reuters have won the Political Reporting award for a series of reports of widespread intimidation efforts by acolytes of Donald Trump to undermine the electoral process by threatening and vilifying poll workers and government officials in 16 states, and the lack of a significant law enforcement response. The reporters tracked down seven individuals aggrieved by false narratives of vote rigging who confessed to making threats that experts called clear and specific enough to warrant criminal prosecution.

The award for Technology Reporting goes to the Forbidden Stories Network, the Washington Post and Guardian U.S., for “The Pegasus Project.” Their reporting revealed that spyware sold by the Israeli company NSO Group Technologies to combat terrorism and crime was used to tap into the phones of 65 business executives, 85 human rights activists, 189 journalists and more than 600 politicians and officials around the world.

Dave Biscobing of KNXV, a Phoenix affiliate of ABC, is honored for Local Television Reporting for “Politically Charged,” a series of reports revealing that police and prosecutors testified to the existence of a street gang they invented to convince a grand jury to authorize surveillance of political protestors. Investigations, resignations, demotions and lawsuits ensued and all 39 felony cases tied to the surveillance were dismissed as a result of the revelations.

The award for National Television Reporting goes to A.C.Thompson of ProPublica and two collaborators, PBS Frontline and the Berkeley Investigative Reporting Program, for “American Insurrection,” an eye-opening hour-long examination of emboldened far-right extremist activity across the country. Thompson’s reporting, aided by Lila Hassan and Karim Hajj of Frontline, spurred new federal probes including one resulting in the arrest of four white supremacists and generated an avowed Pentagon effort to combat extremism among active-duty soldiers.

CNN Chief Foreign Correspondent Clarissa Ward and her crew are honored for Foreign Television Reporting for real-time coverage of the rapid rise of the Taliban as U.S. forces withdrew from Afghanistan. From the capture of Kandahar and Ghazni to the abandonment of the Bagram air base and gunfire on the streets of Kabul and crush at its airport, Ward added context to chaos, wearing a full-length black abaya to interview jubilant fighters contradicting leaders’ assurances of a new Taliban and terrified women afraid to leave home.

“The work of these distinguished journalists proves that diligent reporting will always have the power to affect positive change throughout the world,” said Long Island University President Kimberly R. Cline. “Long Island University is pleased to recognize this year’s George Polk Award winners for their exceptional investigations that will be remembered over the course of history.”

Last week, the George Polk Awards program announced the creation of the Sydney H. Schanberg Prize to honor long-form investigative or enterprise journalism embodying qualities reflected in the late reporter’s legendary career, and named Luke Mogelson of the New Yorker as its initial recipient for his firsthand coverage of the January 6, 2021 attack on the United States Capitol. The annual prize is funded by Schanberg’s widow, the journalist Jane Freiman Schanberg, who stipulated that it honor “highly distinguished, deep coverage of armed conflicts; local, state or federal government corruption; military injustice; war crimes, genocide or sedition; or authoritarian government abuses” of at least 5,000 words “that results from staying with a story, sometimes at great risk or sacrifice.”