BROOKVILLE, NY, October 1, 2020 – Results of a breaking Long Island University Steven S. Hornstein Center for Policy, Polling, and Analysis national poll were announced in the aftermath of the first presidential debate for Election 2020.

WHO DID A BETTER A JOB IN THE DEBATE?

Americans were asked who they thought did a better job in Tuesday evening’s debate between Trump and Biden.  Among respondents, 41 percent said that Biden did a better job in the debate, while 22 percent said that Trump had a stronger performance.  More than a third of respondents (37 percent) said there was no difference (18 percent) or gave no opinion on the matter (19 percent).

WHO WOULD YOU VOTE FOR IF THE ELECTION WERE HELD TODAY?

While a variety of factors were mentioned, the one issue that mattered most on deciding how to vote among respondents was the economy (26 percent). Following close behind was coronavirus (13 percent), racial inequality (12 percent), law and order (11 percent), and health care (11 percent).  Undecided voters and Americans between the age of 45 and 60 reported the economy as the most important issue at a higher rate than other demographics. Americans between the age of 18 and 29 reported racial inequality at nearly double the rate of other age demographics (21 percent).

Among respondents that were asked after the first presidential debate, the majority of Americans (71 percent) said their mind is made up on their election vote, while 17 percent indicate they might change their minds and 12 percent said they aren’t sure.

Among undecided voter respondents, the demographic majorities were women (59 percent), education less than a bachelor’s degree (72 percent), and age 18-29 (36 percent). The one issue that mattered most to undecided voters was the economy (32 percent).

Among the respondents, 88 percent said they are likely to vote in the November elections (1,324 total likely voters).

A comparison of pre-debate and post-debate national polls conducted in the days before and after the event by the Long Island University Steven S. Hornstein Center for Policy, Polling, and Analysis indicated that the presidential debate had little effect on likely voters.  Collectively, the difference in respondents’ answers varied 3 percent or less in the days before and after the presidential debate for the majority of poll questions. The only exception included Trump’s debate performance. Among pre-debate respondents, 32 percent said that Trump would do a better job. Among post-debate respondents, 22 percent said that Trump did a better job.

Two presidential and one vice presidential debates remain in the 2020 election cycle. The election will be held in 33 days on November 3, 2020.

This Long Island University Steven S. Hornstein Center for Policy, Polling, and Analysis online poll was conducted through SurveyMonkey from September 30 – October 1, 2020, among a national sample of 1,502 adults ages 18 and up. Respondents for this survey were selected from the nearly three million people who take surveys on the SurveyMonkey platform each day. Data for this week have been weighted for age, race, sex, education, and geography using the Census Bureau’s American Community Survey to reflect the demographic composition of the United States. The modeled error estimate for this survey is plus or minus 3.5 percentage points.

The Long Island University Steven S. Hornstein Center for Policy, Polling, and Analysis conducts independent polling, empirical research, and analysis on a wide range of public issues. Our studies inform the public and policy makers about critical issues, attitudes, and trends shaping the world. Faculty and scholars from all schools of study at Long Island University participate in data collection and analysis. Visit liu.edu/Hornstein for more information and results from this post-debate national poll. 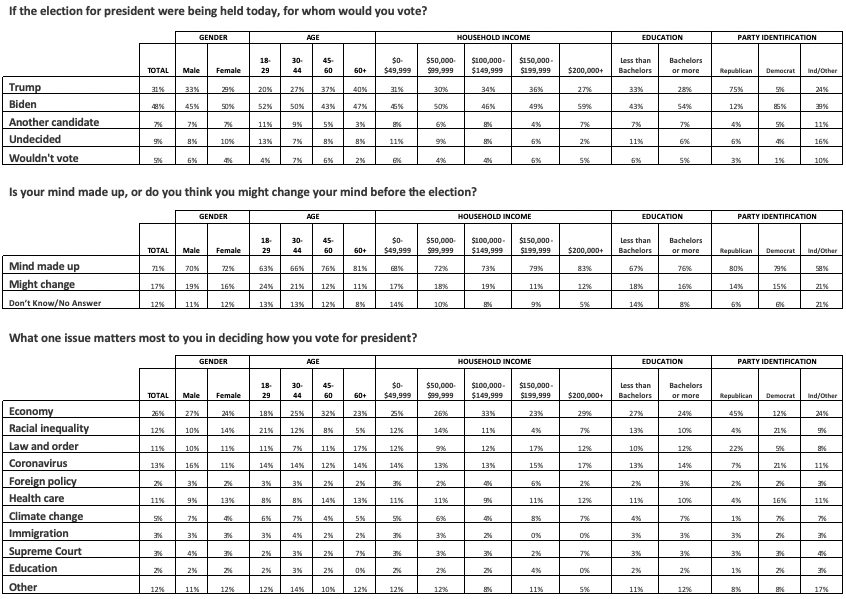