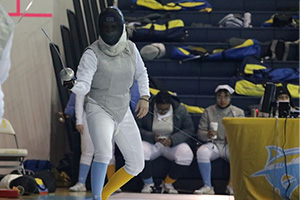 The LIU women’s fencing team was undefeated in a hosted tournament. The “LIU Shark Tank Challenge,” drew a half a dozen schools to compete. The Sharks won against NJIT, Wagner, Wellesley, Drew and SIT. Anna Szántay was the highlight among individuals in the foil, going 15-0 with three wins against each school in attendance.