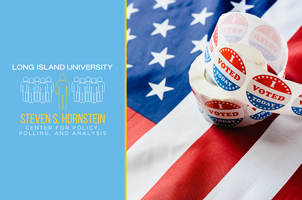 Brookville, N.Y., (Nov. 2, 2022): The results of a breaking New York State mid-term election poll by Long Island University Steven S. Hornstein Center for Policy, Polling, and Analysis were announced less than a week from election day to be held on November 8, 2022. 54 percent of respondents said they would vote for Senator Chuck Schumer as he seeks a fifth term in the U.S. Senate.

WHO WOULD YOU VOTE FOR IF THE ELECTION FOR U.S. SENATE WERE HELD TODAY?SCHUMER 54%; PINION 27%; UNDECIDED 10%; NOT PLANNING TO VOTE 6%; ANOTHER CANDIDATE 3%

New Yorkers were asked who they would vote for if the election for U.S. Senate were held today. 54 percent of respondents said they would vote for Democratic Candidate Chuck Schumer. 27 percent said they would vote for Republican Candidate Joe Pinion. 10 percent said they were undecided. 9 percent said they were not planning on voting or voting for another candidate. There were regional differences in voting preferences. Regions that preferred Chuck Schumer (Democrat) at the highest rates were New York City (60 percent), Central New York (58 percent), and Capital Region (57 percent). Regions that preferred Joe Pinion (Republican) were Mohawk Valley (44 percent), Southern Tier (43 percent), and North Country (40 percent). Among respondents, the demographics most undecided were independent (21 percent), Hispanic (16 percent), age 18-44 (16 percent), women (14 percent), and household income less than $50,000 (14 percent). The highest rate of respondents not planning to vote for U.S. Senate by region was Mohawk Valley (15 percent). Among respondents not planning on voting, the leading demographics were independents (16 percent) and age 18-29 (14 percent).

This Long Island University Steven S. Hornstein Center for Policy, Polling, and Analysis online poll was conducted on SurveyMonkey Audience from October 24 to 26 among a sample of 1001 adults ages 18 and up in New York. Data for this poll have been weighted for age, gender and ethnicity to match the population of New York using the Census Bureau’s American Community Survey. The modeled error estimate for this survey is plus or minus 3 percentage points.

The American Opinion Panel, created by the Hornstein Center for Policy, Polling, and Analysis at Long Island University, is building a nationally representative panel of U.S. adults to provide a voice for Americans on critical issues and trends through opinion surveys. Visit liu.edu/american-opinion-panel to sign up. Your opinions matter.

Long Island University, founded in 1926, is a leading research and teaching university that continues to redefine higher education by providing high-quality academic instruction by world-class faculty. Recognized by Forbes for its emphasis on experiential learning and by the Brookings Institution for its “value added” to student outcomes, LIU has a network of over 285,000 alumni, including industry leaders and entrepreneurs around the globe. Visit liu.edu for more information.