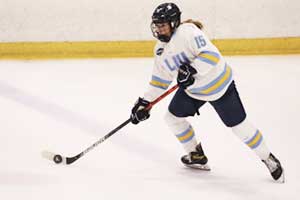 Lisa Schrofl, a first-year defender & forward on the women’s ice hockey team, is competing with her native Austria in the 2022 U18 IIHF World Women’s Championship. Schröfl has been an Austrian national team member since 2011 and played for the Vienna Sabres, the 12-year national champions in Austria. The Sharks open their first season under head coach Kelly Nash on September 24 against Minnesota Duluth at Northwell Health Ice Center.

LIU Grad Set to Lead as Dean of Libraries