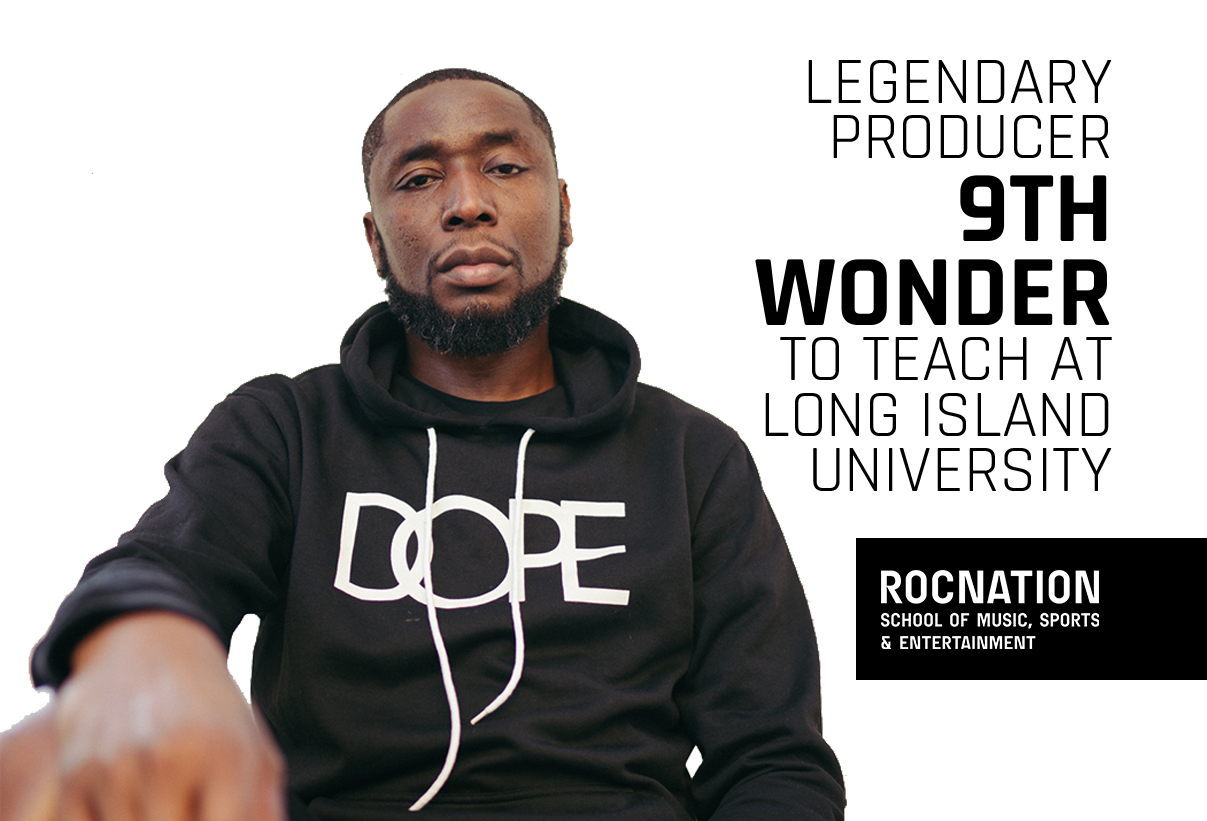 Brooklyn, New York (May 24, 2021) – Long Island University announced today that super producer 9th Wonder has joined the faculty of the Roc Nation School of Music, Sports & Entertainment as a visiting professor and artist in residence, teaching courses in hip-hop history and the making of an album. He joins award-winning soprano saxophonist Sam Newsome, and renowned baritone vocalist Colin Levin, on the growing roster of exceptional artists who will provide hands-on instruction to students of the Roc Nation School.

“The Roc Nation School of Music, Sports & Entertainment will welcome its inaugural class of exceptional students this fall who will be taught by world-renowned artists and educators, giving them practical insight and real-world, hands-on experience,” said Long Island University President Kimberly R. Cline.

9th Wonder is a legendary producer, CEO, DJ, and lecturer who has taught at Duke University and Harvard University. He began his career as the main producer for the group Little Brother, and has also worked with JAY-Z, Kendrick Lamar, Destiny’s Child, Jean Grae, Wale, Murs, Drake, Buckshot, Chris Brown, Rapsody, Erykah Badu, Jill Scott, Big Boi of Outkast, Ludacris, Mac Miller, David Banner, and Mary J Blige. He has served as an artist in residence at North Carolina Central University, the University of Pennsylvania, and the University of Virginia. He is currently working on a research project in conjunction with the Loeb Library at Harvard University, chronicling the top 200 hip-hop albums of all-time.

“Music changed my life and opened doors for me in ways that I never could have imagined, so it’s only right that we impart our knowledge to help the next generation of ambitious leaders,” 9th Wonder said. “I’m truly honored to teach at the Roc Nation School of Music, Sports & Entertainment and look forward to equipping these students with the tools to break barriers in their own lives and careers.”

Sam Newsome graduated from the Berklee College of Music with a degree in jazz composition and arranging. He then toured the world playing in the bands of music greats such Donald Byrd, Terence Blanchard and Lionel Hampton. Newsome has released 15 critically acclaimed recordings as a lead, and has appeared on over 40 recordings as a supporting musician. This includes appearing in numerous movie soundtracks such as The Inkwell featuring Larenz Tate, and Sugar Hill featuring Wesley Snipes. Newsome was also selected by the 68th Annual DownBeat Critics Poll and 14th Annual International Critics Poll as one of the top soprano saxophonists of 2020. Newsome has served as a professor in the Music Department at Long Island University for 14 years.

Colin Levin has performed at many of the top concert stages in the United States including his critically acclaimed Carnegie Hall debut in 2018 as the Baritone soloist in Mark Hayes’ Gloria presented by Distinguished Concerts International New York (DCINY). He has appeared with the Caramoor Festival, both Tanglewood’s Ozawa Hall and Koussevitzky Music Shed, Jordan Hall in the East Coast professional premier of Jake Heggie’s For a Look or a Touch, and numerous opera companies and concert venues around the world. He joins the Roc Nation School faculty in Fall 2021 after previously teaching at Rowan University, Concord Academy, the International Summer Opera Festival of Morelia in Mexico, and the Mason Gross School of Music at Rutgers University. Colin holds degrees from the Oberlin Conservatory of Music and the University of Illinois: Champaign-Urbana, and has served on the Voice and Music History Faculty with the Boston University Tanglewood Institute since 2013.

“We’re thrilled to welcome such an esteemed group of musicians to serve as lecturers at the Roc Nation School of Music, Sports & Entertainment,” Roc Nation CEO Desiree Perez said. “Their collective wisdom and versatility will be essential to ensuring that the students receive a well-rounded education.”

The Roc Nation School of Music, Sports & Entertainment will prepare students for a wide range of careers in performance, entrepreneurship, all aspects of music, and sports business management. The School offers undergraduate degrees in applied music; music technology, entrepreneurship and production; sports communication and marketing; sports management; and vocal performance. Students will engage with university professors, alongside visiting guest artists and lecturers, while participating in immersive internships, ensuring they graduate with both hands-on experience and a network of professional contacts.

Roc Nation, founded in 2008 by JAY-Z, has grown into the world’s preeminent entertainment company. Roc Nation works in every aspect of modern entertainment, with recording artists, producers, songwriters and more. Roc Nation’s client list includes some of the world’s most recognizable names: from Rihanna and J. Cole to Buju Banton and Snoh Aalegra. Roc Nation is a full-service organization, supporting a diverse roster of talent via artist management, music publishing, touring, production, strategic brand development and beyond. Roc Nation Sports was founded in 2013, bringing the organization’s full-service touch to athletes across the NFL, NBA, MLB, and global soccer including Todd Gurley, Kyrie Irving, Skylar Diggins-Smith, Robinson Cano, Kevin De Bruyne and more.

LIU, founded in 1926, continues to redefine higher education, providing high quality academic instruction by world-class faculty. Recognized by Forbes for its emphasis on experiential learning and by the Brookings Institution for its “value added” to student outcomes, LIU offers over 250 degree programs, with a network of 270,000 alumni that includes industry leaders and entrepreneurs across the globe.