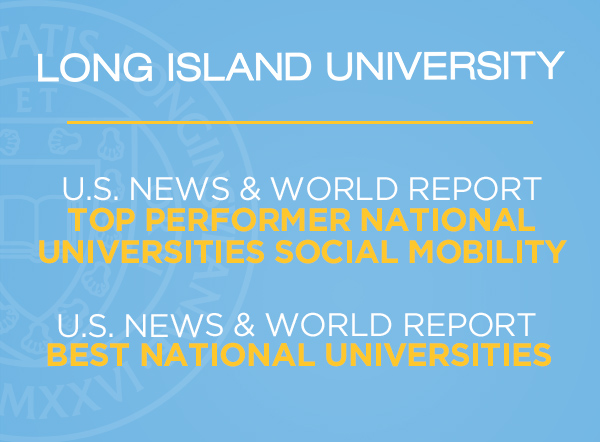 For the fourth consecutive year, Long Island University has been ranked on U.S. News and World Report’s list of Best Colleges for 2021. The distinction represents excellent performance and is widely recognized as a reliable indicator of excellence in higher education conferred by an unbiased trust agent. LIU earned additional recognition as a top national performer in social mobility. The prestigious ranking follows recent accolades from The Princeton Review and Colleges of Distinction.

With more than 15 measures of academic quality, the U.S. News 2021 Best Colleges provides data-driven information and guidance to help prospective students and their families understand their higher education options. In addition to the online announcement made in September, U.S. News will also publish most of the rankings with robust datasets in the “Best Colleges 2021” guidebook.

The 2019-2020 academic year was one marked by profound accomplishments and significant growth for LIU. Last fall, the University received approval for the College of Veterinary Medicine – the first in the New York metropolitan area and only the fourth in the Northeast, joining the University of Pennsylvania, Cornell University and Tufts University.

In May, LIU announced the George Polk School of Communications, building upon the 71-year legacy of the George Polk Awards in Journalism and ushering in a new era of reporting, broadcasting, writing and production.

LIU faculty achieved numerous successes, including prestigious awards from organizations like the National Science Foundation, the National Institutes of Health, the United States Department of Agriculture and the Research Council of Norway, among others.

Renowned researcher Dr. Bhaskar Das joined LIU Pharmacy from the Mt. Sinai School of Medicine to lead the University’s core facility in medicinal chemistry. Dr. Das has received more than 20 grants from the National Institutes of Health and his 28 patents have earned over $100 million. He has conducted groundbreaking research in cancer therapy, obesity, cardiovascular and neurodegenerative diseases and Alzheimer’s disease.