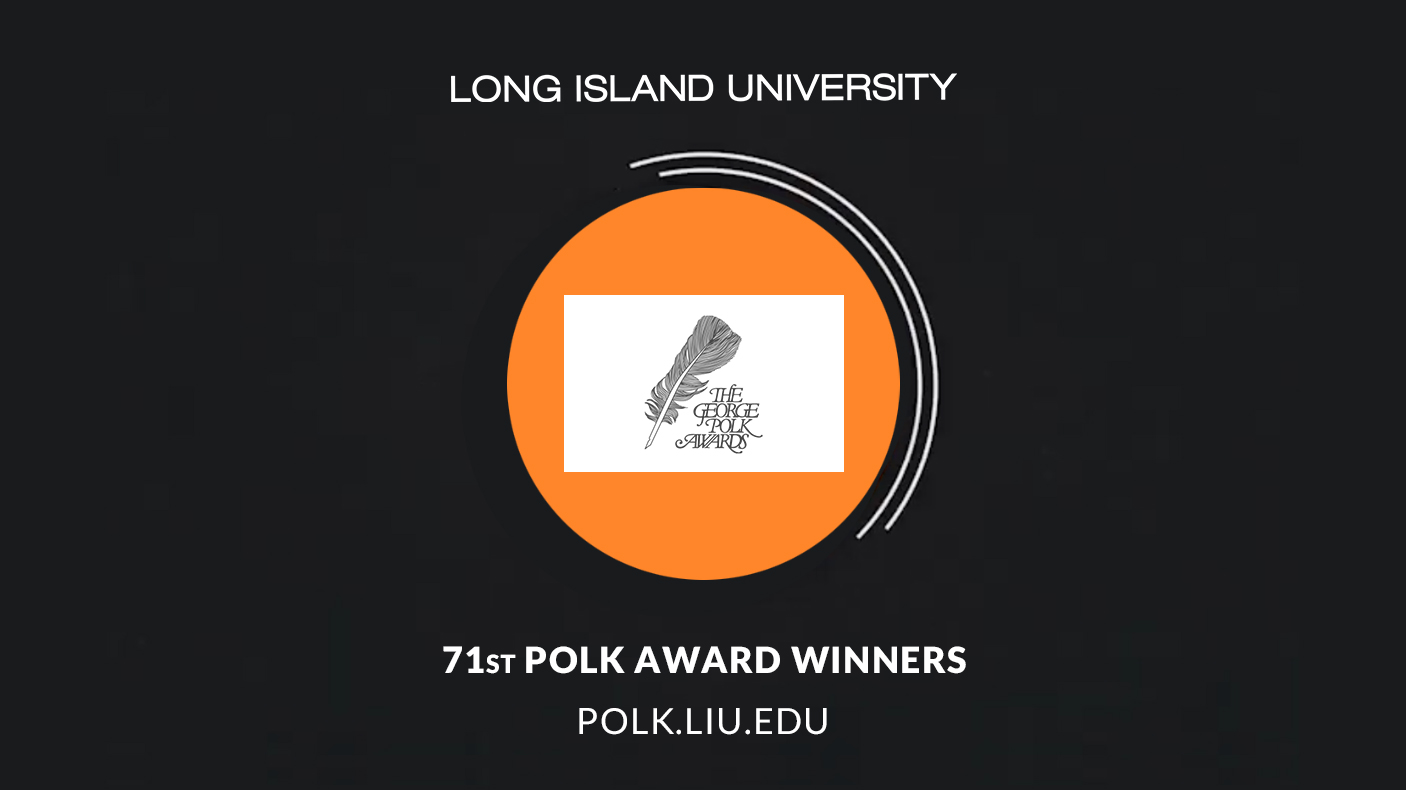 BROOKVILLE, N.Y. (April 30, 2020) – Long Island University’s 71st Annual George Polk Awards will recognize the winners of the prestigious honor in a video ceremony that will be posted on April 30th on www.liu.edu/polk. The presentation will be hosted by award-winning journalist Charlayne Hunter-Gault introducing videos submitted by the winners about their award-winning journalistic pieces. This year, the George Polk Awards is honoring 15 winning entries in 14 categories for outstanding work done in 2019.

“For the last 71 years, Long Island University’s George Polk Awards have honored the influential, investigative, thought-provoking work of reporters throughout the nation,” said Long Island University President Kimberly R. Cline. “While we could not present these awards in person this year, these exceptional journalists deserve to be recognized for their tenacious and fearless pursuit of the truth.”

As we have seen over the last several weeks during the COVID-19 public health crisis, journalists provide the public with necessary information and updates from around the world. Now more than ever, it is important to recognize the role journalism plays in telling the stories that impact our society. The outstanding work of this year’s winners sheds light on a range of deceit and corruption – with profound and sometimes deadly consequences – foreign countries as well as federal agencies, corporate offices and local governments in the United States.

“Every year we look forward to hearing from the winners, who tell us how they got their stories and what impact the stories had,” said John Darnton, curator of the awards. “And this year — thanks to video — we can do so again, despite the tribulations of isolation.”

The George Polk Awards recognize sacrifice, virtue and truth. Long Island University is proud to honor these journalists and recognize their exceptional work as part of this iconic annual tradition. This year’s award winners were announced in the First Amendment Lounge at the National Press Club in Washington, D.C. on February 19, 2020.

“The stature that the George Polk Awards in Journalism has gained is a testament to the outstanding journalists who have been honored, our dedicated panel of judges, and the growing national reputation of Long Island University,” stated Long Island University Chairman of the Board Eric Krasnoff. “Today we are proud to honor these remarkable journalists and their stories that took tremendous courage and hard work to tell.”

This year’s winners chosen from over 551 submissions include:

Azam Ahmed of The New York Times, received the award for Foreign Reporting for risking his safety time and again to portray the reality and impact of violence perpetrated by gangs, drug cartels and even police in firsthand dispatches from Brazil, Jamaica, Honduras, Guatemala and Mexico, where he is stationed as the Times Bureau Chief.

The award for National Reporting went to Lomi Kriel of the Houston Chronicle for revealing previously unreported aspects of the Trump Administration’s immigration policy and tactics that extracted a heavy and sometimes lethal toll on Latin American refugees, including the continued separation of some families without apparent reason.

The staff of Newsday received the award for Metropolitan Reporting for “Long Island Divided,” a series three years in the making that exposed an endemic pattern of discrimination by suburban realtors steering homebuyers of color away from white enclaves in violation of federal and state law. It drew promises of action from officials at every level of government.

The award for Local Reporting went to Brian M. Rosenthal of The New York Times for unearthing a pernicious scheme by unscrupulous lenders to drive up the price of taxi medallions and turn huge profits by selling them to unsophisticated cab drivers with loans they could never repay, leading borrowers into financial ruin so devastating at least nine committed suicide.

Mark Scheffler, Malachy Browne and the Visual Investigations Team of The New York Times were honored for International Reporting for using local plane spottings, satellite imagery, cockpit recordings and Google Earth tools to map and geolocate the attacks to establish that Russian pilots in Syria bombed four hospitals, a busy commercial street and a refugee camp, killing scores of civilians. It was one of a number of wide-ranging coups the team pulled off combining advanced technology with ground level reporting in Venezuela, Afghanistan, Libya, North Korea and Hong Kong.

The award for Financial Reporting went to Noah Buhayar, Caleb Melby, David Kocieniewski and Lauren Leatherbyof Bloomberg News for groundbreaking stories on how wealthy, well-connected individuals perverted the stated intention of “opportunity zone” incentives in the 2017 federal tax code for their own profit. The program was aimed at spurring economic growth in depressed areas, but some developers reaped tax breaks by using it for such high-end projects as a long-planned $4 billion luxury North Miami development and the construction of a Ritz-Carlton hotel in downtown Portland, Oregon.

Dominic Gates, Mike Baker, Steve Miletich and Lewis Kamb of The Seattle Times were honored in the Business Reporting category for first exposing the cooperative arrangements

between Boeing and the Federal Aviation Administration that led to approval of design changes in 737 Max jets blamed for two crashes, killing 346. Times reporters traced FAA approval of the flawed flight control system to its decision to defer to Boeing’s own safety analysis, which they attributed to pressure from leaders of the company and the agency to speed production and avoid adding costs.

Helena Bottemiller Evich of Politico won the award for Environmental Reporting for describing how a politicized Department of Agriculture ignored its own climate action plan, devoted a miniscule portion of its budget to climate change, which it acknowledges is the gravest threat to food production, and buried a study warning of lost nutrients in rice, the leading source of nutrition for 600 million people, provoking a highly regarded scientist to quit in disgust.

The award for Military Reporting went to Craig Whitlock of The Washington Post for forcing the release of interviews conducted about the Afghan War as part of a five-year, $11 million federal “Lessons Learned” project. After Whitlock received more than 2,000 documents, including some initially withheld, he puzzled out key redactions before producing “The Afghanistan Papers,” which demonstrated that “senior U.S. officials failed to tell the truth about the war in Afghanistan throughout the 18-year campaign, making rosy pronouncements they knew to be false and hiding unmistakable evidence the war had become unwinnable.”

Lisa Gartner of The Philadelphia Inquirer received the Justice Reporting award for “Beaten, Not Silenced,” which exposed a pattern of violent physical abuse of boys housed at the Glen Mills Schools, a 193-year-old reformatory in suburban Delaware County. Gartner’s reporting was so devastating that within days state officials ordered Glen Mills closed and pledged to do a better job of monitoring conditions at juvenile justice facilities across Pennsylvania.

The award for Political Reporting is shared by Chance Swaim, Jonathan Shorman and

Dion Lefler of The Wichita Eagle and Luke Broadwater and the staff of The Baltimore Sun for turning journalistic intuition into deep dives into public records that revealed municipal misconduct leading to the ouster of mayors in both cities.

Eagle reporters determined that Mayor Jeff Longwell steered a $524 million contract for a desperately needed water treatment plant to friends and supporters, rejecting the unanimous choice of a selection panel. Longwell lost his reelection bid after a campaign that turned on the Eagle’s investigation of an ad falsely connecting his opponent to sexual harassment allegations.

An offhand remark set Broadwater and his Sun colleagues off on an investigation that determined Baltimore Mayor Catherine Pugh had gleaned $800,000 in payoffs disguised as bulk purchases of her “Healthy Holly” children’s book by a hospital network and health insurers. As a result, Pugh resigned and pleaded guilty to federal charges, the network’s board and CEO departed, and the state and city toughened ethics laws.

Lizzie Presser of ProPublica and The New Yorker won the award for Magazine Reporting for “The Dispossessed,” an account of how speculators use legal loopholes associated with “heirs’ property” laws in the South to seize black-owned ancestral lands, uprooting lifelong residents who assume their homes and property have been passed down to them. Especially poignant was Presser’s portrait of two brothers in a North Carolina coastal town jailed for nearly eight years for refusing to leave.

The award for Television Reporting went to John Sudworth of BBC News for “Inside China’s Hidden Camps,” which documented the reality of camps authorities established in Xinjiang province to indoctrinate hundreds of thousands of Muslims in an effort to erase their religion and culture. Allowed by authorities to visit one camp depicted as a model of agreeability, Sudworth used satellite photos, leaked documents and interviews with forlorn parents separated from their children to paint a very different picture.

A Special Award was presented to Nikole Hannah-Jones of The New York Times and contributors to “The 1619 Project,” a supplement published on the 400th anniversary of the advent of American slavery, using essays by journalists and scholars to explore the role of slavery in history and its enduring effects in contemporary American society. A powerful introduction by Hannah-Jones, the project’s creator and driving force, examined efforts of black Americans to advance the nation’s expressed ideals of democracy, liberty and equality in the face of centuries of oppression and exclusion.

History of the George Polk Awards

In 1949, Long Island University established a new journalism prize to memorialize George Polk, a CBS correspondent who was killed while covering the civil war in Greece. The mission of the George Polk Awards, as distinguished from other journalism honors, focused on recognizing not the news organizations or publishers, but investigative reporters themselves.

Much about journalism has changed in the seven decades since the inaugural Polk Awards, including the rise of the Internet and the technological disruption it has caused. But one constant has endured and even thrived: intrepid, courageous reporters committed to doing whatever it takes—even at risk of their own life and liberty—to uncover matters of critical importance to an informed public and the very foundation of democratic society.

As the only major American journalism prize that has always honored work across all media platforms, the Polk Awards has consistently been at the fore of the changing ways we access news and information. The list of Polk winners includes some of the biggest names in journalism. Seymour Hersh, Christiane Amanpour, Jimmy Breslin, Walter Cronkite, Thomas Friedman, Edward R. Murrow, Bill Moyers, A.M. Rosenthal, Jane Mayer, Sidney Schanberg, Pete Hamill, I. F. Stone, Studs Terkel, and the teams of Woodward and Bernstein and Barlett and Steele are all Polk laureates.

LIU, founded in 1926, continues to redefine higher education, providing high quality academic instruction by world-class faculty. Recognized by Forbes for its emphasis on experiential learning and by the Brookings Institution for its “value added” to student outcomes, LIU offers over nearly 400 accredited programs, with a network of 265,000 alumni that includes industry leaders and entrepreneurs across the globe. Visit liu.edu for more information.