New York City, like few places on earth, blends the contemporary and historical to create an iconic aesthetic that enchants and allures the world’s best and brightest. Thus, it is fitting that the University’s urban campus, located in the heart of downtown Brooklyn, maintains a similar appeal.

For nearly a century, the prodigious edifice marking the northeast corner of Flatbush and Dekalb has marked the borough’s dynamic culture. Originally the Paramount Theatre, which drew sold out crowds for concerts featuring the era’s finest performers — such as Ella Fitzgerald, Miles Davis, Chuck Berry and Ray Charles — the Rococo-style building now marks the home of Long Island University. In addition to restoring the renowned venue, LIU is committed to building and sustaining premier facilities, in order to enable the continued flourishing of academics, athletics, research and student life. 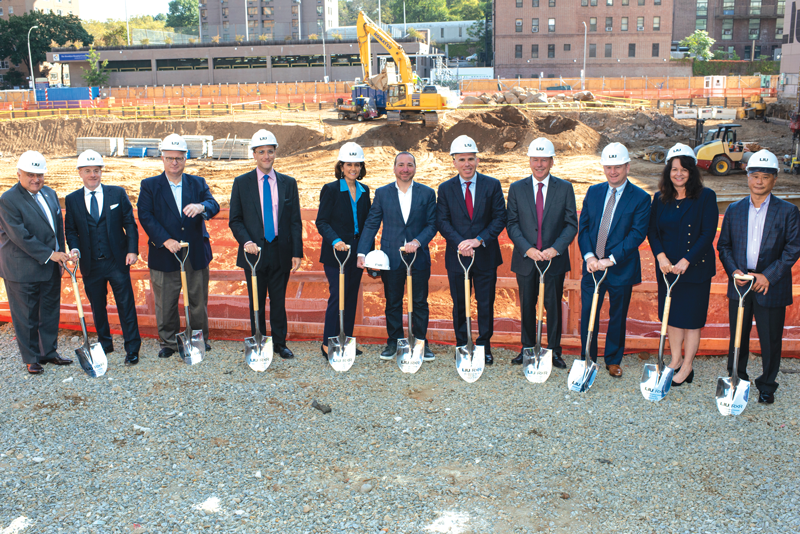 This fall, the University broke ground on a major campus development project in partnership with RXR Realty, one of New York City’s largest real estate owners, investors, operators and developers. The project will enhance LIU’s student and community experience at the Brooklyn campus, including new academic spaces, a state-of-the-art athletic field, fitness and wellness facilities, a parking garage, a 34-story residential building with 30% of units dedicated as affordable, and on-site campus and streetscape improvements.

“This is the largest campus improvement project at LIU Brooklyn since it was founded nearly a century ago,” President Cline said. “The new facilities and unprecedented investment in our University will advance excellence in scholarship, athletics, and academic research. Our Brooklyn campus is a prime destination for students across the U.S. and abroad. Our new expansion will further enhance the exceptional student experience at LIU.”

The project builds upon the University’s strategic plan of expanding and modernizing its current academic programs, provide affordable programs to its diverse student body, and address necessary maintenance improvements on its campus. In addition to the new facility, LIU will receive substantial financial resources that will be used for short- and long-term capital needs, and to continue to increase the University endowment to maintain LIU’s position as a best value institution.

“Brooklyn is the most vibrant and dynamic borough in New York City, and Long Island University is proud to call it home,” said Eric Krasnoff, Chair of the Board of Trustees. “Our historic partnership with RXR to develop LIU’s Brooklyn campus not only strengthens our University, allowing unprecedented investment into our Strategic and Master Plans, it also enhances our commitment to Brooklyn and positions LIU for the future. I know that another 100 years is ahead of LIU as a foundation of this community.”

LIU’s leadership has made capital improvement efforts throughout the University, increased community engagement and doubled the four-year graduation rate. It has attracted impressive new faculty engaged in prestigious research in pharmaceuticals, nursing, and health sciences. Additionally, the school’s financial security has enabled LIU to hold tuition increases at two percent, less than half the national average, since 2014.

“LIU has been an anchor of downtown Brooklyn since 1926, and we are excited to help them build towards the future and educate the next generation of leaders,” said Scott Rechler, CEO and Chairman of RXR Realty. “These new facilities will help LIU continue to be a good neighbor to the Fort Greene community and advance its mission of academic excellence.”