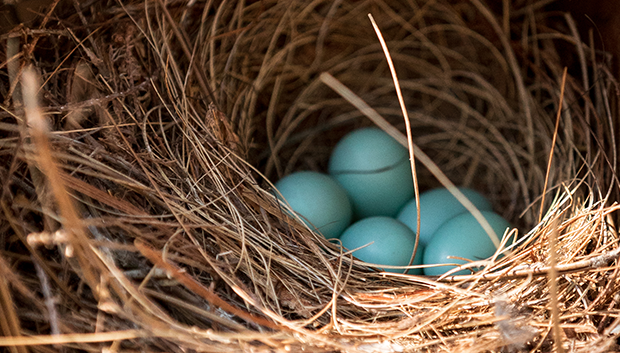 An international team of researchers led by LIU Post Biology Professor Dr. Daniel Hanley has used a new experimental approach to study how birds evaluate whether an egg in their nest belongs to them or whether it was left by a freeloader—apparently an all too common practice in the bird world. His groundbreaking work has been drawing increasing attention in scientific circles.

Birds’ eggs can range in color from blue-green to brown, and can often be speckled. Traditional theory assumes that if the impostor’s egg appears quite similar to their own eggs, then the bird will likely accept it, but if it differs dramatically, then the bird will reject it.

A recent study led by Dr. Hanley, which was published in the prestigious peer-reviewed Proceedings of the Royal Society B, under the auspices of the world’s oldest independent scientific academy, discovered that host birds in Europe and North America actually respond to some colors more strongly than to others. It seems that hosts—what the foster parents are called—really “dislike” brown eggs and remove them at a much higher rate than blue-green eggs, despite how different they appear from their own eggs.

In another new paper by Dr. Hanley and his colleagues, Hanley’s team discovered that these same behaviors are also exhibited by an unrelated bird host that lives in South America. These findings illustrate that humans have a lot to learn about how wild birds use color information in their decision making.

In their recent paper published in The American Naturalist, Dr. Hanley and his colleagues, Dr. Mark Hauber (University of Illinois Urbana-Champaign), Tomáš Grim and Karel Gern, studied how the common blackbird responds to an unprecedented range of colors. Since birds can see far more colors than humans can perceive, Dr. Hanley and co-author Karel Gern made a bird-specific color wheel to make paints for coloring artificial eggs. They manipulated the three main components of color: hue, saturation (i.e., intensity) and brightness. Dr. Hanley found that birds responded strongly to a greater scope of colors than had been previously tested. The researchers also found that the components of color interacted in the birds’ perceptual space. For example, birds may respond to some hues only when they are intensely colored.

Armed with this new information, Dr. Hanley and his colleagues will probe the subtle differences in color perception among birds around the world. The nearly 10,000 species of birds have a wide range of evolutionary histories and ecologies, which have led to unique perspectives that this research group plans to explore. In this way, birds may finally show the authors their true colors.