At its recent 2018 annual conference held in Boston, the National Collegiate Honors Council paid its highest tribute to Dr. Joan Digby, director of the Honors College at LIU Post, by giving her the NCHC Founders Award: “the most prestigious award bestowed by our organization.”

The Founders Award, which was created on the association’s 50thanniversary, “serves to honor members who have been instrumental in the development and advancement of NCHC and its programs.”

“If honors education in some sense celebrates a Renaissance vision of humankind, Joan Digby is that image incarnate,” said Dr. Jeff Portnoy, co-chair of the NCHC Publications Board and editor of the NCHC Monograph Series, at the presentation ceremony. “She is a scholar, an essayist, an editor, a poet, an adventurer in nature, a protector of wild camels, a woman of the horse, a publisher, a film producer, a provider of food and lodging for generations of cats, and a Founder of initiatives central to the heart of honors education and NCHC.” 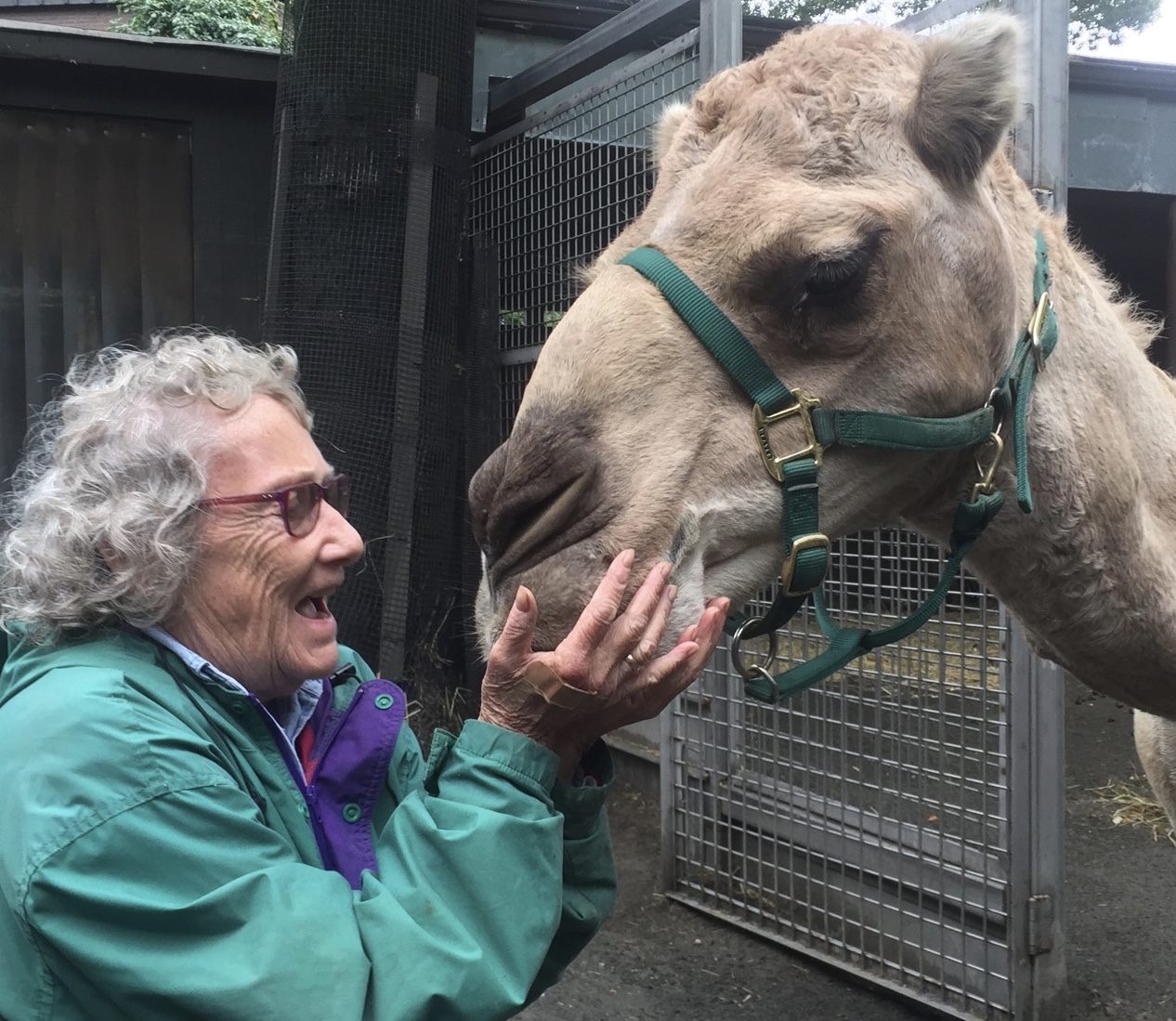 Dr. Digby has been at LIU Post since 1969 after she received her Ph.D. in English from New York University, where she did an award-winning dissertation on 18thcentury fabulists and had previously gotten her undergraduate degree. She earned her Master’s at the University of Delaware.

The honors program at Post had gone through three directors when Digby was asked in 1977 if she wanted to take it over. She readily agreed—and has been running it ever since. According to the National Collegiate Honors Council, the average duration of an honors director is three years.

“I have fun,” Digby declared. “I never get bored. I really have a ball with it.”

Over the years, she has been the president of the national organization as well as of the Northeast Region. She’s served on numerous NCHC committees as well as its publications board. She took the initiative and with her assistant, Tracey Christy, compiled “Peterson’s Guide to Honors Programs & Colleges,” which NCHC called “a mammoth undertaking [that] chronicled the resources of honors operations, attributes, and offerings at colleges and universities across the country.”

With Heather Thiessen-Reilly, Digby co-edited “Partners in the Parks: Field Guide to an Experiential Program in the National Parks,” now in its second edition, which grew out of a unique collaboration between NCHC and the National Park Service. Digby’s inspiration for the partnership program had come after she had visited Rocky Mountain National Park, a breathtaking 415-square-mile expanse in Estes Park, Colorado, following an NCHC conference in Denver.

While gazing at that magnificent panorama, Digby had an epiphany.

“I started to think that Long Island students do not move off this square,” she recalled. Back in the classroom she asked her students how many had been to a National Park? A few had been to Sagamore Hill in Oyster Bay, the home of President Theodore Roosevelt, and some students had been to the Statue of Liberty, but almost none had ventured to a National Park west of the Mississippi. Digby came up with a two-page proposal.

“I wrote it knowing that I have no idea how to go camping!” she laughed. “I’m from the Bronx—what do I know?” She emailed her proposal to NCHC’s members and within minutes she said—snapping her fingers to emphasize the speedy response—two professors in the honors program at Southern Utah University replied. “They said, ‘We’ve always dreamed of doing this.’ I said, ‘Go run with it!’” And so the innovative program was born.

“They are really life-changing trips,” she said. All told, the program now has more than 1,5000 alumni.

Partners in the Parks epitomizes Digby’s belief that an honors program should get college students to do undergraduate academic research and write a thesis as well as obtain some “experiential learning out in the world—not just sitting in the classroom.”

What she won’t do, she said, is do “honors by contract, meaning that you take any class but it you do an extra this or an extra that, you get honors credit,” Digby explained. “I’ve done it a few times out of necessity, but it’s not my idea of what honors should be.

“For me,” she continued, “all my classes are little seminars—that’s how I’ve structured it. The students are never in a lecture situation. They’re really talking with each other and communicating as a group and doing things in a group—and that makes a big difference, too.”

As she envisions it, having students meet in an honors class together helps them form a cohort that may long outlast their graduation. Recently two students Digby hadn’t seen in over 30 years each came to tell her how much she’d motivated them in their subsequent careers.

“I try to push them wherever they’re going,” she said, referring to the honors students she’s seen come and go.

Along the unconventional path she’s taken, Digby has befriended many feral cat colonies on the Post campus as well as taking the horses at the nearby Northshore Equestrian Center under her wing. In 2005, with her collage-artist husband, John Digby, she founded The Feral Press, which has published more than 250 limited-edition books. Last year, on her sabbatical, she wrote three volumes of poetry, including one with her favorite equine collaborator, Snowball. When she turned 50, she learned to ride horseback on him despite his cantankerous reputation.

“He was known as a sour horse,” she admitted. “Even now, he’s not a really friendly horse…Snowball doesn’t think. Snowball eats, tries to bite me, and goes for a walk—I love him!”

About 20 years ago, Digby recounted, “I decided that if I could pay particular attention to him, I could soften his temperament and make him bite people less frequently.”

These days, it’s become a moot issue since Snowball has lost all his teeth. Nonetheless, their partnership has been quite productive. “I’ve written poems about him for years,” she said with a smile.

Although she no longer rides on horseback, Dr. Joan Digby knows she has many more inspirations still to come.

[Photo of Dr. Digby with a camel was taken by Ruth Iannuzzi.]