When LIU Brooklyn Professor Josephine Clark learned that her former student had actually founded a school in Liberia and put her name on it, she said she nearly fell out of her chair.

“It was mind-blowing!” exclaimed Clark, an adjunct English professor who’s been teaching at the Brooklyn campus for almost three decades. Rose Kingston, a dance major, had taken Clark’s non-Western Literature class in the Fall 2012 semester, and she was struggling. “I remember that Rose seemed a little bit timid when she first came to my class.”

“Professor Clark inspired me,” said Kingston (Brooklyn ’14, BFA). “She helped develop in me the love of learning.”

Born in Liberia, Kingston had left that West African country in the middle of its first civil war when she was 9 years old. Third grade was as far as she’d gotten in school. She’d seen the bodies of dead civilians, been shot at, and survived a rocket attack on the ship leaving the seaport that would take her to a refugee camp in Ghana. She came to America when she was 15.

“I was placed in the ninth grade because of my age, not my ability,” Kingston said. She managed to graduate from Sheepshead Bay High School in Brooklyn (no longer in operation) and enter LIU. There, in her dormitory, she followed up a recommendation from her freshman orientation and signed up for her first counseling session.

“I was so depressed. I think I was suffering from symptoms of PTSD,” she recalled, marveling over the impact the psychologist had on her. “I was able to pull together and understand what was happening to me and put names on my different emotions.”

But it was in English 64 where she encountered Professor Clark. 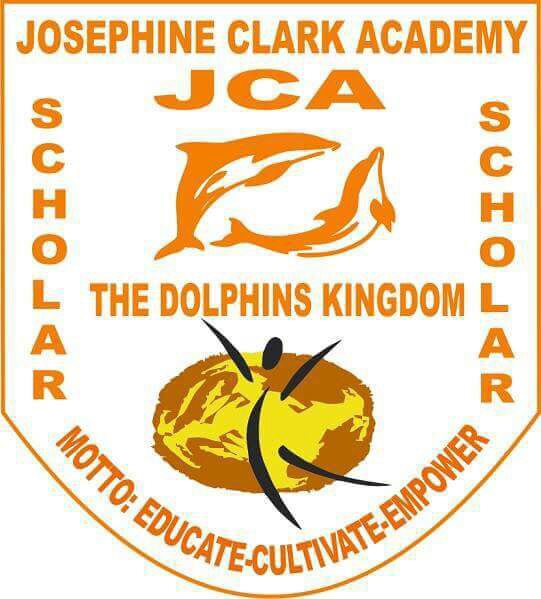 “I felt I couldn’t read,” Kingston said, and she asked her teacher to recommend a class that would help her improve. “She said, ‘You’re smart. You just need someone to fully understand where you are academically and to help guide you through this process. And if you would agree, I will tutor you.’ I thought she was joking. And she said, ‘I’ll tutor you every Saturday from 10 to 2 o’clock. If you come on campus, I’ll come on campus.’

“Her dedication and her focus were unbelievable,” Professor Clark said. “A lot of it was reading and comprehension—and confidence.” In those sessions, they bonded. Clark went to her graduation ceremony from Connolly College in 2014, but then lost touch with her student. In the meantime, Kingston had gotten her Master’s in Education from Montclair State University in New Jersey—and returned to her native country.

In 2016, Kingston founded the Josephine Clark Academy in an abandoned warehouse on a piece of land she owned in a village about seven miles from the country’s capital, Monrovia.

“The community I live in didn’t have any schools,” said Kingston. She started with 14 children, one of them her own son; today she has 43 students, ranging in age from 3 to 16. Her goal is to craft an individual education plan so each one could overcome the gap in their education because of the war. “They don’t have a learning disability,” she said. “They just have a deficiency because of the lack of resources.”

Besides running her new academy, Kingston also teaches English language arts and dance, too. She says she’s the only ballet teacher in Liberia.

Looking back, Kingston has many people to thank for helping her stay on track at LIU Brooklyn. She credited the dance department as well as her counselors at the Arthur O. Eve Higher Education Opportunity Program (HEOP), named after the former Deputy Speaker of the New York State Assembly.

“The HEOP program has been instrumental in the lives of so many students here who couldn’t have survived—especially that first year of college—without the counselors and the support people and the tutors that HEOP provides!” explained Professor Clark. “It  gives them the chance to find out all that they really can do.” According to HEOP director Kamel Boukerrou, 275 students are currently enrolled in the program at LIU Brooklyn.

“Thank God for HEOP because they gave people like me a second chance,” Kingston said. “I’m so grateful to everyone who helped me at LIU.”

A couple of years ago, Clark was recovering from surgery when she suffered a life-threatening blood clot. “I should have died that night,” Clark recalled. “Afterwards, I kept asking myself, ‘Why am I still here?’ I said, ‘God, what is it you want me to do? Do you have more students at LIU that you want me to go and harass?’ All of a sudden this year, I get this information; so I said, ‘Well, I guess I need to be here!’ I really thought that she was just joking when she told me that one day she was going to open a school and name it after me.” 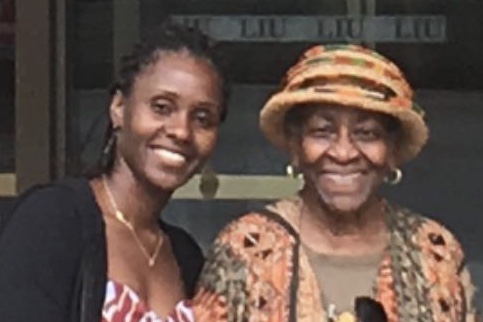 “What better name to give this school than ‘Josephine Clark Academy’?” Kingston exclaimed. “Every time I say the name, I remember what LIU did for me through Professor Clark!”

Currently Kingston is working to establish the Josephine Clark Academy Foundation in the United States to make it easier to obtain financial support to expand her program—and shrink the long waiting list of children eager to learn at a school in Liberia named after her inspiring LIU Brooklyn English professor.

“This story is exemplary of LIU at its best,” said Dr. Leah Dilworth, chair of the English Department at LIU Brooklyn, adding that Kingston’s accomplishment was another example of the good work that teachers and students are doing here every day.

In the photo above, Rose Kingston, left, poses with her teacher, Professor Josephine Clark, at a recent visit to the LIU Brooklyn campus this summer. To get more information on the academy, contact Rose Kingston at roskingston@yahoo.com