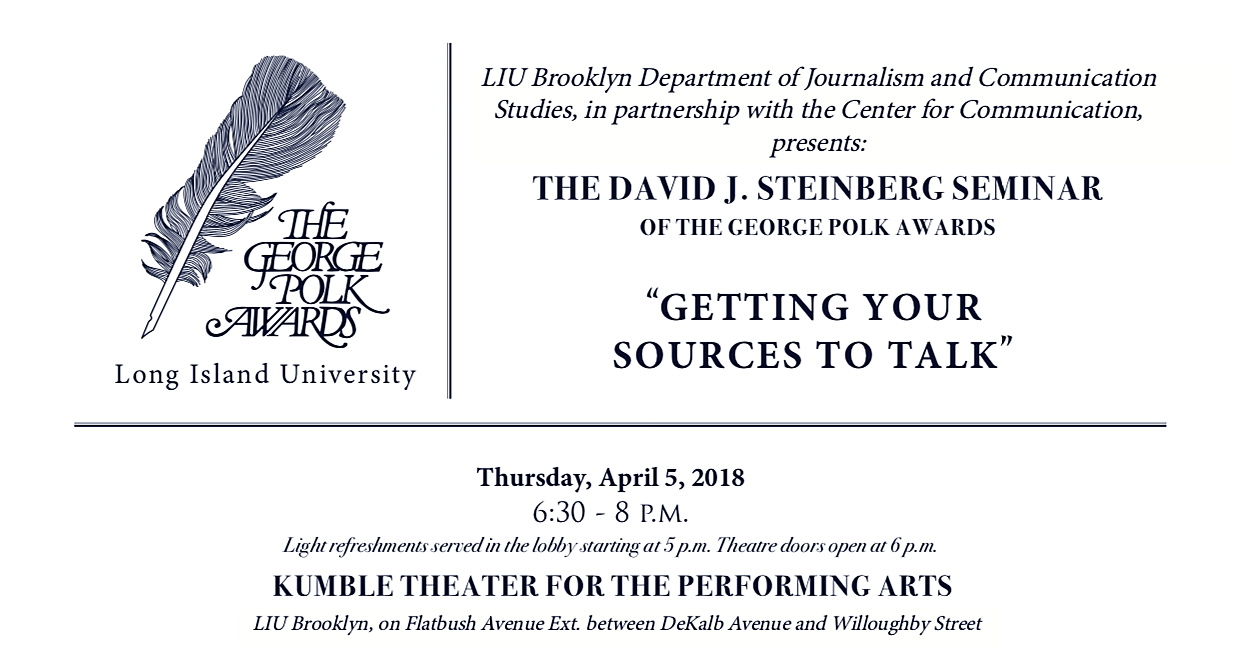 The seminar will highlight three Polk Award-winning journalists discussing how they reported some of the most impactful national stories of the past year.  Award-winning journalist Charlayne Hunter-Gault of PBS will moderate the seminar on “Getting Sources to Talk.”  The panel includes Jodi Kantor of The New York Times, winner of the Polk Award for National Reporting for exposing the decades-long sexual predation of the movie producer Harvey Weinstein and the campaign to cover it up; Stephanie McCrummen of The Washington Post, winner of the Polk Award for Political Reporting for digging into the past of Senate candidate Roy Moore of Alabama to disclose on-the-record accounts of sexual assault upon a 14-year-old girl and the pursuit of other teenagers; and Elle Reeve of VICE News, winner of the Polk Award for National Television Reporting for on-the-scene coverage of the Charlottesville demonstrations that probed the motivations and tactics of the white nationalist leaders who turned a “Unite the Right” rally at the University of Virginia into a tragic weekend.

The Seminar is open to media and the public.

The Kumble Theatre at LIU Brooklyn
One University Plaza, Brooklyn, NY 11201
Free and Open to the Public.  Space is Limited.  Reserve a seat by emailing Polk.Awards@liu.edu

History of the Polk Awards

In 1949, Long Island University established a new journalism prize to memorialize George Polk, a CBS correspondent who was killed while covering the civil war in Greece. The mission of the George Polk Awards, as distinguished from other journalism honors, focused on recognizing not the news organizations or publishers, but investigative reporters themselves.

Much about journalism has changed in the six decades since the inaugural Polk Awards, including the rise of the Internet and the technological disruption it has caused. But one constant has endured and even thrived: intrepid, courageous reporters committed to doing whatever it takes—even at risk of their own life and liberty—to uncover matters of critical importance to an informed public and the very foundation of democratic society.

As the only major American journalism prize that has always honored work across all media platforms, the Polk Awards has consistently been at the fore of the changing ways we access news and information. The list of Polk winners includes some of the biggest names in journalism. Seymour Hersh, Christiane Amanpour, Jimmy Breslin, Walter Cronkite, Thomas Friedman, Edward R. Murrow, Bill Moyers, A.M. Rosenthal, Jane Mayer, Sidney Schanberg, Pete Hamill, I. F. Stone, Studs Terkel, and the teams of Woodward and Bernstein and Barlett and Steele are all Polk laureates.