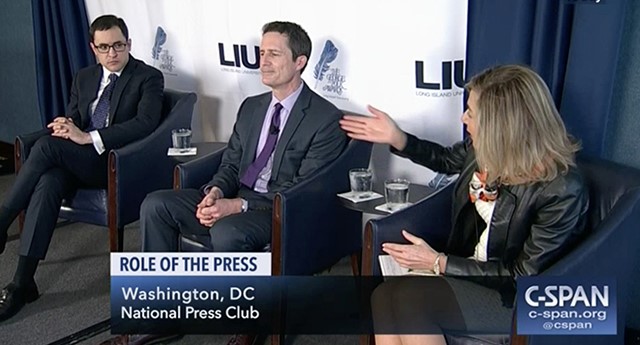 Washington, D.C. — Elevating one of the most prestigious awards in journalism, Long Island University (LIU) held a nationally televised event at the National Press Club in Washington, D.C., to announce the winners of the 69th Annual George Polk Awards.  The event continues the University’s longstanding tradition of honoring and celebrating the impact of courageous and authentic journalism on our national and global discourse.

Click here to watch C-SPAN’s coverage of the Polk Awards.

The event included opening remarks by LIU President Kimberly Cline and a special panel discussion on the role of the press moderated by Washington Post media columnist Margaret Sullivan and featuring top national correspondents Greg Miller of the Washington Post and Michael S. Schmidt of The New York Times.

“There is an interesting dichotomy between information and truth,” President Cline said.  “With smart phones and social media, we have never had more access to information.  And yet, truth is more elusive than ever.  The Polk Awards honor truth.”

The George Polk Awards are conferred annually to honor special achievement in journalism. The awards place a premium on investigative and enterprising reporting that gains attention and achieves results. They were established in 1949 by LIU to commemorate George Polk, a CBS correspondent murdered in 1948 while covering the Greek civil war.

The winners of the 69th Annual George Polk Awards will be honored at a luncheon ceremony at the Roosevelt Hotel in Manhattan on Friday, April 6, 2018. This year’s David J. Steinberg Seminar of the George Polk Awards will be held Thursday evening, April 5, 2018 at LIU Brooklyn’s Kumble Theater for the Performing Arts. The seminar topic will be announced shortly.  That event, which will start at 6:30 p.m., is free and open to the public.

Below are the winners of the 69th Annual George Polk Awards (for work published in 2017):