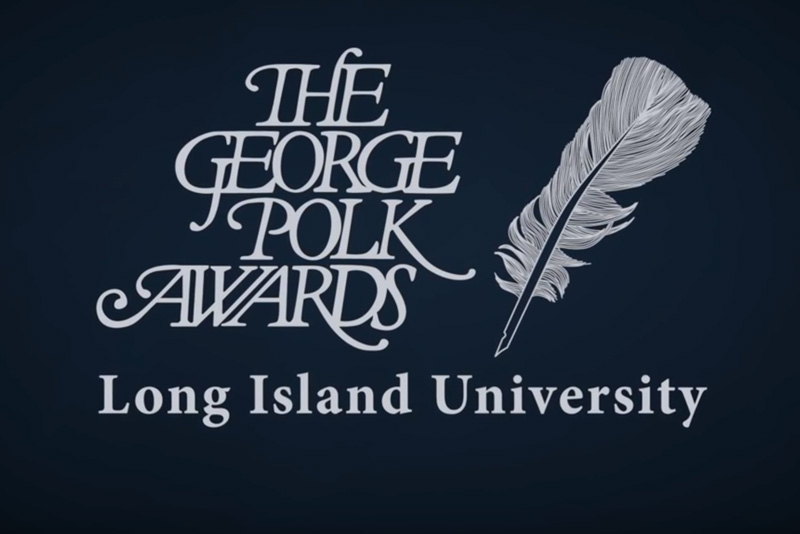 WASHINGTON, DC (Feb. 20, 2018) – In a ceremony held at the National Press Club in Washington, D.C., Long Island University (LIU) announced the winners of the 69th annual George Polk Awards in Journalism, continuing the University’s longstanding tradition of honoring and celebrating the impact of courageous and authentic journalism on our national and global discourse.

Special recognition goes out this year to the staffs of The New York Times and The Washington Post for their extraordinary effort in uncovering the connection between the Trump presidential campaign and the Kremlin that led to Special Counsel Robert Mueller’s ongoing investigation. The Polk judges felt the investigative work, based on the cultivation of sources, was equally outstanding on the part of both newspapers and may play a significant role in safeguarding our democracy from foreign interference. But the important topics of sexual abuse, immigration enforcement, ecological disaster and modern-day slave auctions also gained award-winning coverage in this year’s prizes.

“It’s a time of both crisis and triumph for responsible news media. Of vilification and vindication,” says John Darnton, curator of the Polk Awards and recipient of two Polk Awards and a Pulitzer for his work with The New York Times. “They’re attacked almost daily as purveyors of ‘fake news’ to undermine their credibility. Yet they’ve delivered on their promise to keep the American public informed. Without them, we wouldn’t know what’s going on in Myanmar or Yemen or Charlottesville or Washington. Without them, there’d be no Mueller investigation. So, this year the George Polk Awards have decided to highlight the achievements of the nation’s press, television and online news organizations by announcing the winners in the capital.”

The George Polk Awards are conferred annually to honor special achievement in journalism. The awards place a premium on investigative and enterprising reporting that gains attention and achieves results. They were established in 1949 by Long Island University to commemorate George Polk, a CBS correspondent murdered in 1948 while covering the Greek civil war.

Below are the winners of the 69th Annual George Polk Awards (for work published in 2017):

The staff of The New York Times and the staff of The Washington Post win a Special Award for revealing ties between Trump campaign officials and Kremlin-connected Russians that gave rise to the Mueller investigation.

Iona Craig of The Intercept wins the Foreign Reporting Award for documenting the destruction and civilian casualties of a covert U.S. Navy SEAL raid on a remote village in Yemen.

Jody Kantor and Megan Twohey of The New York Times and Ronan Farrow of The New Yorker win the National Reporting Award for exposing the decades-long sexual predation of the movie producer Harvey Weinstein and the campaign to cover it up.

Melissa Segura of BuzzFeed wins the Local Reporting Award for drawing attention to innocent men framed for murder by a Chicago police detective with stories that led to their release from prison.

The International Consortium of Investigative Journalists won the Financial Reporting Award for mining a trove of 13.4 million records to reveal how corporate giants and prominent wealthy individuals use financial manipulations to evade taxes.

Nina Martin of ProPublica and Renee Montagne of NPR won the Medical Reporting Award for explaining the reasons and portraying the tragedies behind an alarming increase in maternal deaths in pregnancy and delivery in the United States.

Stephanie McCrummen and Beth Reinhard of The Washington Post won the Political Reporting Award for digging into the past of U.S. Senate candidate Roy Moore of Alabama to disclose on-the-record accounts of sexual assault upon a 14-year-old girl and his pursuit of other teenage girls.

Ben Taub of The New Yorker won the Magazine Reporting Award for showing the humanitarian devastation caused by the shrinkage of Lake Chad in Africa and underlining the connection of the ecological disaster to famine and armed uprising.

Adam Dean and Tomas Munita of The New York Times won the Photography Award for capturing the plight of the Rohingya people desperately fleeing burning villages in Myanmar and pouring into woefully ill-equipped refugee camps in Bangladesh.

Elle Reeve of VICE News won the National Television Reporting Award for her on-the-scene up-close coverage of the protests in Charlottesville, Virginia, that probed the motivations and tactics of white nationalist leaders behind the rally that turned deadly in August.

David Begnaud of CBS News won the Public Service Award for capturing the destructive power Hurricane Maria unleashed on Puerto Rico in September and documenting how limited aid from the federal and territorial governments delayed the island’s recovery.

Gail Collins of The New York Times won the Commentary Award for her columns of satiric wit and neighborly wisdom that probe the oddities of American politics and social mores, skewering public figures on all sides of the aisle with equal-opportunity zest.

The distinguished winners of the 69th Annual George Polk Awards will be honored at a luncheon ceremony at the Roosevelt Hotel in Manhattan on Friday, April 6, 2018. This year’s David J. Steinberg Seminar of the George Polk Awards will be held Thursday evening, April 5, 2018 at LIU Brooklyn’s Kumble Theater for the Performing Arts. The seminar topic will be announced shortly.  That event, which will start at 6:30 p.m., is free and open to the public.

About Long Island University (LIU)
LIU, founded in 1926, is a nationally recognized teaching and research institution which continues to redefine higher education.  Recognized by Forbes for its emphasis on experiential learning and by the Brookings Institution for its “value added” to student outcomes, as well as accolades and recognitions from US News and World Report, The Princeton Review, and Wall Street Journal/Times Higher Education.   LIU’s network of 200,000 alumni includes industry leaders and entrepreneurs across the globe. LIU’s renowned faculty, the LIU Promise student mentoring program, innovation in engaged learning, further distinguish LIU as a leader among the nation’s most respected universities. Visit liu.edu for more information.