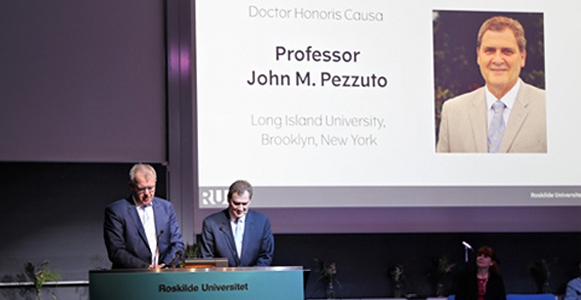 ROSKILDE, DENMARK—Dr. John Pezzuto, Dean of LIU Pharmacy and Vice President, LIU Health and Research, received an honorary doctorate from Roskilde University in Denmark.  Dr. Pezzuto received the honor at a ceremony held on September 15 for his groundbreaking research on resveratrol.

“Professor Pezzuto is one of the pivotal scientists in the field of the health effects of resveratrol and derivatives,” stated Ole Vang, Associate Professor of Department of Science and Environment, Roskilde University, who has conducted follow-up research into resveratrol.  “The breakthrough paper from January 1997 in the international journal Science showed the potential cancer preventive effect of resveratrol on skin cancer in mice.”

The 1997 paper was the jumping off point for a second round of resveratrol research that led to the understanding of the health effects of resveratrol including cancer-prevention, longevity, and obesity-related diseases such as diabetes and cardiovascular disease. Resveratrol is found in various edible plants including grapes, peanuts and berries.  According to the Web of Science Core Collection, Dr. Pezzuto’s work on resveratrol has been cited more than 3,000 times.

“I am honored to receive this recognition from Roskilde University,” Dr. Pezzuto said.  “But more importantly, I am honored to work with my colleagues in the international research community to advance our understanding of how resveratrol can help improve our health.”

The prestigious degree was given in a ceremony attended by students, faculty, and the greater scientific community in Denmark. Prior to the ceremony, Dr. Pezzuto gave a lecture at Roskilde University titled “The Life and Times of Resveratrol.”  He also met with graduate students and addressed the Danish Society for Biochemistry and Molecular Biology at the Panum Institute, Copenhagen University.

Dr. Pezzuto is a world-renowned researcher and the 2014 recipient of the Volwiler Research Award from the American Association of Colleges of Pharmacy. His current research interests are predominantly in the areas of biology-driven natural product drug discovery and characterization, with primary emphasis in the fields of cancer chemotherapy and cancer chemoprevention.

He is the author of more than 700 publications, with an h-index of 90, has been cited more than 37,000 times, is the co-inventor of several patents, editor of five books, and a member of over 10 editorial boards of international journals.

About LIU Pharmacy
Founded in 1886 as the “Brooklyn College of Pharmacy” and affiliated with LIU since 1928, the Arnold & Marie College of Pharmacy and Health Sciences (LIU Pharmacy) serves over 1,000 student pharmacists and graduate students, and is home of the Lachman Institute for Pharmaceutical Analysis, the Natoli Institute for Industrial Pharmacy Research and Development, and the Samuel J. and Joan B. Williamson Institute, which focuses on pharmacogenetics. Many alumni, numbering over 20,000, have attained prominence in pharmacy and the other health professions. For more information, visit: www.liu.edu/pharmacy.