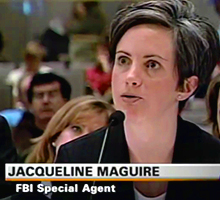 Jacqueline Maguire, MS in Criminal Justice ’99, was named the special agent in charge of the Criminal Division of the FBI’s New York Field Office. After 9/11, Maguire served as the lead agent for the investigation into the five hijackers of American Airlines Flight 77. She received the 2006 Attorney General’s Award for Excellence in Furthering the Interests of U.S. National Security and the 2009 Attorney General’s Award for Distinguished Service.