LIU Professor Emeritus Dr. Lawrence Rocks has just become the first scientist to be named on a Topps Baseball card–and the Major League is abuzz with the news.

In a lab experiment conducted at the Post campus last winter, Dr. Rocks had teamed up with St. Louis Cardinals’ shortstop Paul DeJong, who majored in biochemistry at Illinois State University, to test the old adage that a baseball travels further the hotter it gets. The results weren’t quite what they expected.

“If you heat a baseball to a very high temperature, it  gets mushy, and if you chill it, it gets brittle,” Dr. Rocks explained the results to Jim Hayes, a Fox Sports reporter who covers the Cardinals. “The in-between is where it’s very flexible. At 75 degrees it’s best. But the baseball has multiple layers so the inside temperature is never the skin temperature.”

Dr. Rocks, an LIU Chemistry professor who authored the landmark book, “The Energy Crisis,” in 1972, worked closely with Congress to create the Department of Energy. His son, Burton Rocks, is DeJong’s sports agent.

“Paul was interested in my father’s life—having read a lot about him,” explained Burton Rocks, “and he wanted to one day be his lab assistant.”

Just released the second week of June, the new 2018 Topps Futures Stars baseball card describes DeJong as a “lifelong science ‘nut’ ”  who “spent time in the offseason applying his avocation to his profession. He worked with world-renowned scientist Dr. Lawrence Rocks to study the effects of heat on a baseball.”

A spokeswoman for Topps, Susan Lulgjuraj, confirmed that it’s the first time a scientist has been named on the back of a flagship card. “Generations of baseball fans have used cards to learn math through statistics, reading and just general fun,” she added. “We are thrilled to help spread the world and inspire curious minds to explore.”

Dr. Rocks saw his lab experiment with DeJong as a chance to score educationally with young baseball fans.

“In addition to research I’m working on with sports chemistry and analytics,” Dr. Rocks explained, “I wanted to convey to children the nature of experimentation in the method called ‘science,’ as I believe science is not a subject but rather a method. We wanted to inspire young people everywhere that they can do science. All it takes is curiosity, imagination and objectivity with results.”

Seated in a dugout with the young shortstop recently, the 84-year-old esteemed scientist was asked by a reporter how DeJong handled himself in Pell Hall.

“He was great,” Dr. Rocks told Fox Sports. “He made friends with everybody—from the chairman of the department all the way across the board to the lab assistants and the girls watching him—he was terrific and very careful in the observations.”

“We thought that it was an experiment where we could really control the variables with just looking at heat,” DeJong, 24, told the reporter, “and it turned out we got some really decent conclusions from it—and I got to wear a lab coat, so all good news.”

In the lab, the two men dropped a baseball from the height of 50 centimeters to measure how high it bounces depending on its temperature. The experimenters found a surprising bell curve with their results. The baseball has a sweet spot when the temperature ranges between 68 degrees and 78 degrees, but once it reaches over 80 degrees, its bounce starts to decline significantly.

DeJong made his major league debut on May 28, 2017, at Coors Field against the Colorado Rockies when he hit a home run on his first swing. Later in the season against the Mets, he racked up three doubles and a home run, setting both a Cardinals shortstop and a number eight hitter record with four extra-base hits in one game. The New York Post headlined DeJong’s exploits with a touch of irony: “Meet the newest Mets-killer, whom they nearly drafted.” DeJong signed with the Cardinals in 2015. 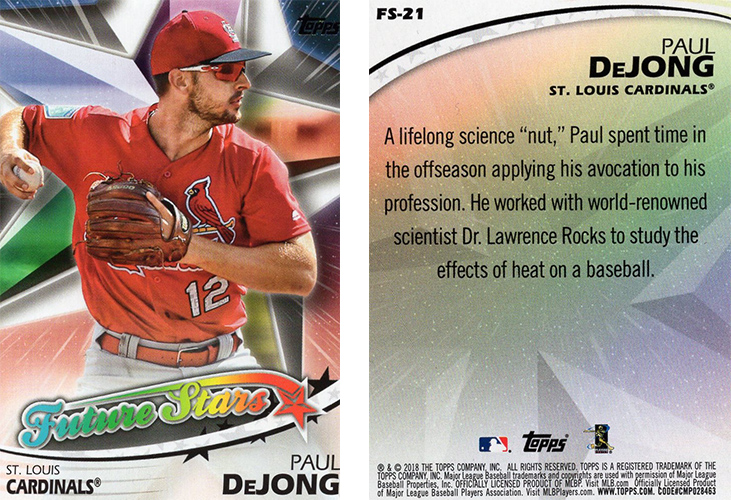