Participants from across the country as well as overseas will be coming to the LIU Brooklyn campus this Friday for the first annual conference on the topic, “Intersection of Linguistics, Language, and Culture (ILLC),” which is being organized by Dr. Isabelle Barriere, associate professor in the Department of Communication Sciences & Disorders at LIU Brooklyn.

The all-day event is under the auspices of the National Science Foundation-funded Research Experience for Undergraduates Site Program (NSF-REU). Dr. Barriere collaborates on the program with Dr. Jonathan Nissenbaum of CUNY’s Brooklyn College.

Dr. Barriere says the program serves two purposes. “The first is to involve undergraduates in research projects that will contribute significant findings to the field of speech-language and communication sciences,” she explained. “The second is to simultaneously encourage and prepare minority students to undertake graduate work on diverse languages and cultures.”

“The program benefits from the tremendous ethnic, linguistic, and cultural diversity of Brooklyn and Queens,” Professor Barrière added, “and from the state-of-the-art research facilities, such as the LIU Downtown Brooklyn Speech-Language-Hearing Clinic, the Brooklyn College Linguistics Laboratory, the CUNY Graduate Center’s Developmental Neurolinguistics Laboratory, the Endangered Language Alliance, the Haskins Laboratories, and Yeled V’Yalda Research Institute.”

One of the highlights of the day is the New York City premiere of the documentary film, “Talking Black in America,” featuring a Q&A after the 1 p.m. screening with producer Dr. Renée Blake, a professor at New York University, in a discussion chaired by Dr. Margareth Lafontant of CUNY’s Medgar Evers College. The 1-hour-and-20-minute film was partly funded by the National Science Foundation.

More than a dozen students will be presenting projects they have conducted under the guidance of mentors including many from LIU Brooklyn, such as Elyanna Moskowitz’s “Variations of Yiddish Among Hasidic Preschoolers: Production and Preference,” Harmony Graziano’s “How to talk place in Hawaiian Creole English,” Daniella Shimoonov’s “Bilingualism vs. Trilingualism in Preschoolers Acquiring Russian, Hebrew and English,” Zian Jaffery’s “The Effects of Maternal Depressive Symptoms on Child Language Performance at 4 Years of Age,” Moné Skratt Henry’s “Phrase Boundary Blinks in American Sign Language,” Daniella Bonhomme’s “Code-switching in Different Generations of Haitian Creole Speakers in New York,” Saundra Scott’s “Impact of Dialectal Variation on Preschoolers’ Acquisition of Questions,” Zaib Javaid’s “Aphasia Group Member Self-Confidence Ratings and the Effect of Error Types and Totals.”

Dr. Barriere credited the grant from the National Science Foundation for “giving undergraduate students in New York the opportunity to research on linguistic and cultural minorities so that they are better represented in research, both in terms of the students who do the research as well as the participants.”

Recently, Dr. Barriere and Dr. Nelson Moses, who founded the CSD department at LIU, were honored for their work with the non-profit organization, Making the Impossible Possible, with which they took students to Haiti for two weeks last summer. “Dr. Moses helped prepare the trip,” she said, “and with two clinical directors, I took 14 students who conducted evaluations and interventions there. It was very successful.” Accompanying Dr. Barriere at the awards gala, which was held on May 27 at BRIC House in Brooklyn, were two students who accompanied her to Haiti, Jasmine Philema and Blandine Joseph. 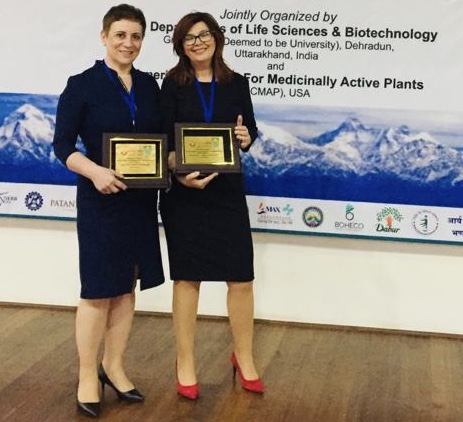